Artists of the World, Unite!
by Loren Nosan

NEW YORK — In early November 2014, Lane Relyea gave a Critical Studies lecture hosted by the MFA program I was attending. One month later, I dropped out. Relyea’s talk didn’t directly lead to my decision to end my grad school career after only one semester. He spoke convincingly about the benefits of MFA programs, especially the strength of the networks and communities that develop within them. With the collapse of the “white cube system” of organized movement of artworks as goods for transactional sale, young artists are now more than ever responsible for creating their own destiny, and the development of independent forums (apartment galleries, blogs, etc…) by peer groups is essential to cultivating a career trajectory in the face of the dearth of more traditional options for emerging artists.

Despite this affirmation of the value of that venerable institutional degree, Relyea admitted that the talk he was giving had not made him popular on the visiting critic lecture circuit. The gospel he preached was not all good news, and the tone that pervaded as we filed out of the auditorium that day was palpably morose. I took an informal poll and found that my peers’ responses ranged from dismay to outrage. People were pissed off. I, however, was totally psyched. What Relyea seemed to be advocating for was no less than a leftist revolution for artists, and while a handful of my comrades (I’d say 15/150) were willing to join me in the coming revolution, the vast majority were having a major, “who moved my cheese” moment. 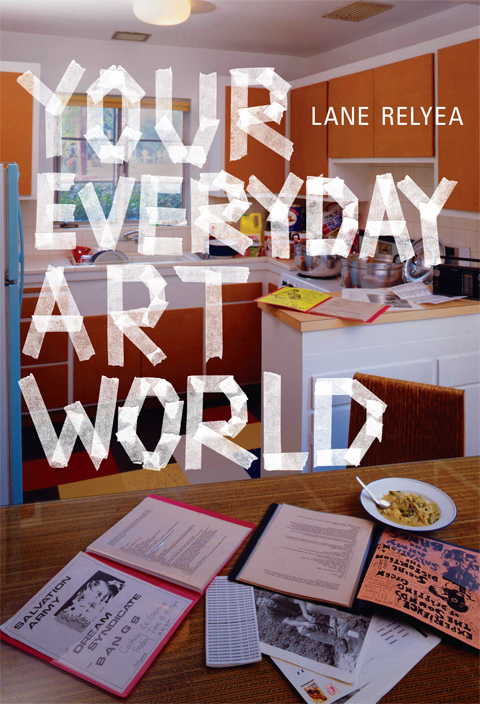 My peers were demonstrating something I had long suspected, but never been able to substantiate in conversation. The lure of art stardom, and that other near-mythical beast, the self-supporting artist, remain powerful motivators in compelling otherwise rational folks to dive headlong into a sea of debt in the hope that they will be one of the golden few who emerge triumphant, anointed by the art world. According to Relyea, that kind of success has never been less likely. His argument, the groundwork of which is laid in his book, Your Everyday Artworld, is that current structures or pathways, to more accurately carry forward the database analogy that pervades the text, ensure that prestige and the monetary benefits that accompany it are reserved for those with a high level of financial and social resources, and the mobility that accompanies them. Most of us are more likely to join the ranks of what Relyea calls “…those left behind, the assistants, adjuncts, and other lower-ranking and less well-known professionals…who man the phones, shuffle the paperwork, and take care of the other daily chores in the artist studio, in the art school’s classrooms and administrative cubicles, in the gallery and museum back offices, and so on.”

Relyea sees the current proliferation of artist-run spaces and the increase in art activity in places that are removed from traditional art-world centers (despite the fact that this activity is not justified by commercial activity to support it) as hopeful evidence that artists are beginning to turn to one another and create their own fields to contribute to. But the managing of these endeavors, which are themselves unlikely to yield monetary compensation, compel the new artist-entrepreneur to act as a publicist, manager, critic, fundraiser, and art handler, while also likely holding down at least one “real” job, bartending, waiting tables, or toiling away in the bowels of one of the institutions they hope one day to show their work in. This leaves little time in the studio, performing the role of artist as it is traditionally understood. For Relyea, this prompts a conceptual shift. The artist is no longer defined by the objects she produces, but instead by this broader range of activities. Artist becomes a social role—the individual and their contributions to the field are privileged over the production of a product. This new hybrid creature—the artist-entrepreneur—is overworked and under-compensated, and so a comparison can be drawn between the artist and the exploited laborer. Relyea feels that the glamorization of the artist and designer in current popular culture ”provides ideological cover for the shift in labor conditions to more chronically intermittent employment with longer work hours and no benefits.”

The increasing disenfranchisement of the middle classes coincides with the rise of the social practice movement and, more recently, the trend toward “fast painting” and assemblage sculpture. Social practice work represents the apotheosis of the artist’s new role as a catalyst or activator of an experience, rather than a maker of objects. Engagement, inclusion, directness, and de-institutionalization are heavily emphasized in the accompanying rhetoric. Fast painting is more symptomatic, obliquely referencing the fact that studio time is limited, and making must take place quickly and efficiently if it is going to happen at all. Both of these movements (however unintentionally in the latter case) align the artist with a broader audience than the wealthy, educated elite who serve as the primary patrons and consumers of art activity. The irony is that the work created in both categories tends to be insider-ish, inscrutable, and thus inaccessible and off-putting to the lay viewer. Of a 1995 exhibition at Tramway in Glasgow, titled “Trust,” which ostentatiously trumpeted its intent to engage a broad audience, Relyea writes, “As for the audience, they weren’t buying it. …what they saw was separation. But this time it wasn’t just the typical alienation from the museum’s or gallery’s patrician condescension or from art’s broken promise of wresting freedom from necessity—this time they were further offended by confronting what appeared to be a closed network, a clique. Like a picture behind glass, the sociality of “Trust” existed apart. …how could sucking on a mint or sipping tea seem like anything but empty interactions, a polite playing-along in response to an offer of cheap refreshments? Here was yet another hollow assertion of art’s universality….”

Even when actual objects are on offer, appreciation is complicated by the clique mentality. “Social shows” of the aforementioned quick painting and slapdash bricolage, made and curated by a group of peers, are difficult to approach without an in-depth understanding of art world context or a personal relationship to the maker. These types of activities function more as symptoms than panaceas for the ills of our current social system (of which, the art world is a microcosm). Relyea is drawn to write about them because they support his scholarly agenda. If the young emerging artist is truly in the same plight as the exploited laborer, we should be forging ties with those that share our circumstances rather than further alienating them, and thus playing into the hands of the financial and cultural elite. One way to do this is to unionize. Relyea points to groups like WAGE (Working Artists and the Greater Economy) and Common Field, and endeavors including CSA (Community Supported Art) subscriptions and crowd-sourced funding as examples of strategies for artists to build solidarity within and outside their ranks. But true progress here requires a sacrifice of individual satisfaction, read:the aforementioned golden promise of art stardom. As evidenced by the reaction Relyea elicits when he delivers his little pep talk to a group of starry-eyed MFA students, the revolution is little more than a pipe dream at present.

What are we to do when presented with a choice between buying in and perpetuating, or opting out and overturning? Can we outsmart the immensely powerful consumerist machine, which is built for taking the authentic and idealistic and turning it into shallow fodder for capitalistic profiteering? For Relyea, social change is the necessary precursor to empowerment. In his lecture he emphasized that autonomous art is only possible when labor reaches a surplus. “Our society does produce a surplus, but it is hoarded by a small segment of the population.” I didn’t drop out of my MFA program because of major grievances like those outlined by the incoming class of 2014 at USC, who all withdrew from that program together this past May. I dropped out because I didn’t want to teach (and even if I did, the odds of getting a teaching job are dismal), and going tens of thousands of dollars into debt so that I could graduate with little to no improvement in my earning potential didn’t make sense to me, despite the advantages and “fast-tracking,” that an MFA provides. I don’t want to be on a fast track. I like my weird, meandering slow one.

Full disclosure—I am not without ambitions, goals, and dreams. I like to think I’m playing the long game, and that by the time I’m geriatric, I will have built a nice little CV for myself, developed a strong studio practice and made lots of authentic, compelling work. All humans face the ultimate creative challenge—how to live our lives according to our beliefs and values. Be brave—the choices we make every day determine the overall arc of the stories we live. Make your own surplus.