An interview with David Henningham in preparation of:
‘The Maximum Wage’ — A Performance Publishing Extravaganza
by Anne Black

Does life seem like a gameshow? A game of skill and chance? It is now!

Do you ever ask yourself what is work for?
Why do some people get paid so much more?
Should all work make a profit?
Should I be paid to do what I love?
Is Austerity really necessary?
What is Money? 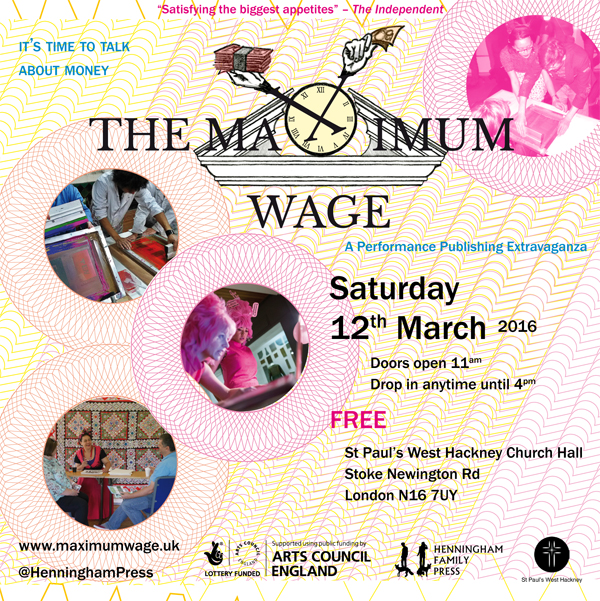 LONDON — Ahead of this free public event involving live screenprinting, publishing and a bit of mischievous rabble rousing, I spoke to David Henningham of the Henningham Family Press about money, art, work, East London and surviving as an artist.

Anne Black: Can you tell us a bit about ‘The Maximum Wage’ and the inspiration behind it? For example, why are the bank notes you are printing called Orwells?

David Henningham: ‘The Maximum Wage’ is a live art show about income inequality. It is inspired by George Orwell’s idea of a limitation of incomes in his essay ‘The Lion and the Unicorn’. We talk about money a lot as a society, but usually within bounds described for us by ourselves and others. The aim of the event is to stimulate moments of clarity about money, status and how we ‘spend’ our time. With eight other artists we hope to provoke, capture, print and publish what our visitors really think about money live (on Saturday 12th March between 11am and 4pm). All the artists have been commissioned to make new work that includes some element of publishing, all unfolding simultaneously and governed by our microclimate of production and consumption.

The centrepiece is ‘The Maximum Wage’ screenprint production line, where the public will help print ‘Orwells’ – money that can be used at the event, as well as in several Hackney businesses. Each player’s ‘wages’ will be determined by their randomly allocated status and a spin of the wheel of fortune. Earnings will be capped at Orwell’s 10:1 or Osborne’s 330:1. It is the battle of the Georges.

AB: When you were at school, what did you want to be when you grew up? Were you aware of different jobs, did you think about money? Were you guided in any direction, or did you follow your own interests?

DH: I wanted to be an author because I was a voracious reader. I was primarily aware of my parents’ jobs – teaching and architecture – and this was the height of Thatcherism so I got the distinct impression that I should not do those jobs. I used to make my own stories, draw pictures and sew them into books. This is what I do today. Stubborn or driven? You decide!

AB: How did you first get interested in making art? What was your experience of art at school? Were you encouraged?

DH: I was good at art at school, but not encouraged. There was no sense that the Arts were vocational. My secondary school tried to move me into the sciences (you can read about that in a piece I wrote for the TES recently), but Havering Sixth Form College was a revelation. The teachers took great pride in our A-level abilities and put a lot of effort into getting us into prestigious Foundation Diploma programmes in the London Art Schools. They were delighted when I got into St Martin’s.

AB: Can you tell us something about your background as artists? Did you go to art school?

DH: Ping and myself met at St Martins College on foundation when we were 17. We went on to take it in turns to study and pooled our knowledge. I went to Chelsea and the Slade and she went to UCL for History of Art BA and Queen Mary University of London to study MA Modernist Literature. I also did a bookbinding apprenticeship. We began Henningham Family Press in 2006 to continue to work together in such a way that mutually encourages our art and family.

AB: You are based in Hackney. How did you settle there? How long have you lived there? How has it changed in that time?

DH: We lived in Hackney because it was cheap at the time. We’ve lived in Dalston for 12 years.

AB: Hackney (and much of East London) has traditionally been a working class, immigrant area. It has a history of activism and has been a home for artists and radicals, partly because of affordability of the space. Do you think this is still the case?

DH: That’s my family on both sides – East End working-class families. One Grandad took part in the Cable Street protests against the Fascists, the other cycled daily to work from Chadwell Heath to Bow. This is our doorstep, so I wasn’t drawn here by anything else, but I almost lost my foothold here because of the property speculation. Space doesn’t draw people here anymore, for that people go to Berlin, Leipzig, Margate, Falmouth… The pace is less conducive to radicalism here now. I think it is becoming a place where people who consume the arts live rather than a home for young artists. People for whom art is a kind of virtue, a higher value, live here now. But that means there’s still a critical mass of critically-engaged people here, so you can get the momentum you need behind something new. People are socially engaged here.

AB: What attracted you to printmaking? What is special about it?

DH: I made sculptures at College. These were a brilliant way to think with my hands, but the reality after graduation was making one big thing for collectors in the art market. We prefer the democracy of printing multiples and the variety of distribution channels. We prefer Art In Public to the Market, although we work in both fields. Print had a more natural connection to the writing and publishing we do as well. It is slightly less immediate than painting too, which makes it more of a conversation with your medium. You have to be a good listener.

AB: What are some of the struggles that artists face now? Do you think there is anything new in this, or has it always been the same for artists?

DH: Paying two rents and getting enough time to work are the continuing struggles, but fundamentally these struggles have changed in the last ten years because the reason for enduring them is changing. A lot of art students genuinely seem to expect a job, or even fame and fortune in the art market. This is because art schools no longer offer what I think of as the British Art School education. Institutions have had an expensive layer of middle-management inserted that discourages open-ended learning and instead markets a fantasy. Overseas students are sought to subsidise the courses, and the art market dominates student expectations. I make art because I want to create a life that I want to live right now. I refuse to be diverted from pursuing my talents into a career that creates a taxable income. To put it in economic terms, I prefer to be poor than become unproductive labour.

AB: What advice would you have for someone in school now, who wanted to become an artist?

DH: Never do something else first you ‘might fall back on’.  Consider studying overseas or in the coastal art colleges.

AB: Your work invites the public to participate. Did you always have this element in your practice? What made you interested to work in this way? How has your practice developed? How is it working together?

DH: I was envious of people who collaborated with other artists at Chelsea. Direct participation adds further risk and energy, an element of reification. We like to choreograph and improvise within a structure that comes from he materials used. The reason the audience are taking an active part is because this is live publishing, and publishing implies a readership. Working together as a married couple is great, you learn to be direct and not argue.

AB: Artists are being priced out of London, and art is being squeezed out of the curriculum. Is art a luxury or a necessity for people?

DH: It is necessary for democratic communication to survive. We think artists should be paid much better by society when they are doing public work, though not necessarily for just ‘being’ artists. It is one revenue stream among many. But in our tradition, the arts follow on when our needs have been satisfied. The real question is what do we do when we have wealth? How do we experience that wealth? That is where the arts belong. I tend to think luxury is something different to wealth. Luxury is out of the ordinary, or when you enjoy plenty at someone else’s expense, or a feeling of plenty that is contingent on the knowledge that others lack.

AB: How did you go about putting together ‘The Maximum Wage’? How did you find the other artists?

DH: We worked on this with a producer, Marie McPartlin, and then put it to one side for a bit as we worked on other projects. Then we did an Arts Council bid of our own. The other artists are long-standing partners, but we are constantly making new friends.

AB: Are there other artists or groups whose work you find inspiring?

DH: Too many to mention. Here are some names that aren’t mentioned enough:

AB: What would you like visitors to take away from the day?

DH: A clearer understanding of what work is. Also a question. Are you enjoying your talents or have you been diverted by someone or something else? If so, what steps do you need to take to dig up that talent?