An individual is not distinct from his place; he is that place.
– Gabriel Marcel, 1948

The house is one of the greatest powers of integration for the thoughts, memories and dreams of mankind.
– Gaston Bachelard, 1958

LONDON — Do Ho Suh (b. Seoul, Korea, 1962) currently lives and works between London and New York. His work centres on the notion of spatial inhabitance and displacement that questions the boundaries of identity. Suh’s re-creation of his previous homes in South Korea and in New York is drawn from the artist’s personal experiences of displacement to which the viewer is encouraged to relate. Objects relating to various concepts of home are sometimes physically acted upon and disfigured, while at other times those bearing specific cultural identities are displaced and exhibited in unfamiliar or alien states. His life-scale architectural installations are presented as mostly floating structures with cloth (silk, nylon or polyester fabric), which represent sections of the interiors of the homes that he previously lived in. Particularly interested in the area that surrounds him both physically and metaphorically, Suh defines space as transportable. Production of the home becomes autobiographical. Suh’s re-creations of his two homes encourage the viewer to experience his personal spaces. As Suh explains, “A home is not only an architectural structure, but harbors immaterial memories. That’s why I chose thin, translucent fabrics.” 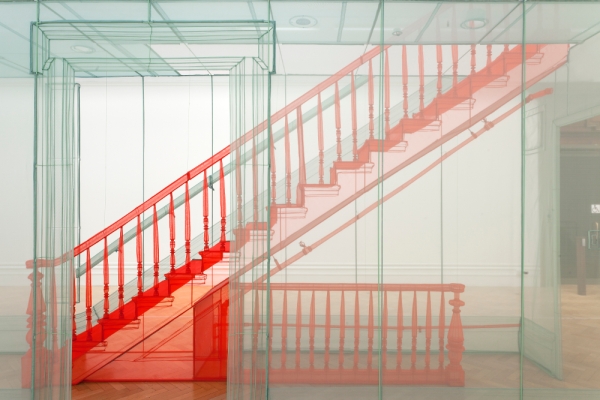 In his first solo exhibition in the UK, at the Serpentine Gallery in London in 2002, his work was described as transitional objects enabling Suh to negotiate what he refers to as his “transcultural displacement”. Suh’s utilisation of a material that is transparent and flimsy also enables him to further achieve his aim of creating unreal spaces. Not only does it make the actual transportation of the works easy, folded and neatly packed, between one place and another, but also the very fact that the viewer can see through to other sections of the living space is once again a reminder that this is not a real space. It is designed intentionally to enable the audience to see multiple spaces in one frame, as though almost in his or her imagination or memory. “By removing the work physically from the realm of the ‘real’, the work and the image of the home represented create a moment of aesthetic contemplation, disconnected from the materiality of social conditions that constitute the basis of even our dreams.” (Corrin and Kwon, 2002). According to the artist, “the space I’m interested in is not only a physical one, but an intangible, metaphorical, and psychological one.”

The emotional connection of the self with ones space and surroundings is fundamentally important in the construction of a sense of belonging. This emotional connection affords some protection from the uncertainties of the outside world, as well as from rational or irrational insecurities, which can undermine a position of perceived stability. The state of belonging, represented by notions of “home”, is primarily a state of mind rather a material reality and as a subject for art practice, tests out modes of making (the deployment of materials etc.). Suh invites viewers to step into and move through the individual “rooms” and “corridors” to experience these dislocated personal spaces first-hand.

New York City Apartment/Corridor/Bristol at the Bristol Museum & Art Gallery on view through 27 September 2015, was especially commissioned for Bristol. Suh re-created the corridor of his New York apartment building in celadon green and red polyester. This important commission can be considered within the artist’s recent interest in structures of transition such as staircases, hallways and gates. 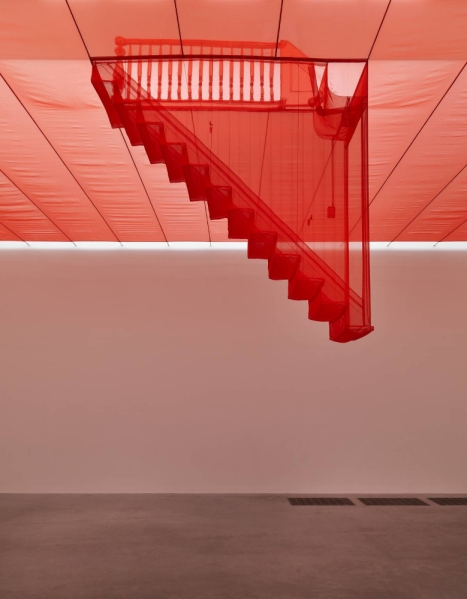 In Suh’s other works such as, Staircase-III (2010), the work is presented literally hovering in the air, but is unreachable, leading to nowhere. In the Bristol exhibition, the metaphor of a journey is evoked as the corridor and staircase acts as a passageway between the two entrances to the exhibition space.

It is said that the artist intends to bring together all the works in the series and physically join them with a fabric corridor. This possibility would exemplify that the focus is not the physical house, or its specific rooms, that constitute home but all of the spaces taken together. They represent the individual’s journey, and the memories created and carried through each chapter of that person’s life.

For Suh, home is very much a physical, tangible experience. This quality of home is pivotal because it allows him to visually represent displacement, inviting viewers to participate and share his experience. As the art historian Miwon Kwon puts it, “Suh has pursued his thematic interest in the binding of individuality and collectivity, identity and anonymity, memory and space, mobility and home, and the transportability of site-specific art.” (Corrin and Kwon, 2002). The transportability of his houses are significant, since they remind the viewer that the home is not necessarily the physical space in which people reside, but consists in our memories and specific stories within and of that space. 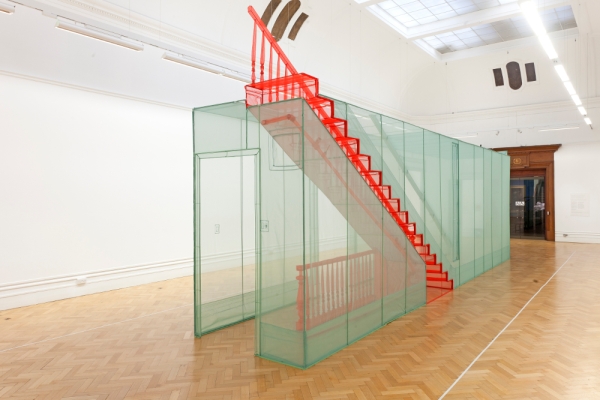 Suh’s numinous, dream-like installations take this notion a step further and contribute to the idea that perhaps a home is not fixed or specific, but is where, “one dwells not only in a place but also in travel. Thus, home should be seen as something that individuals could take along as they move through time and space… For a world of travellers, home comes to be found in a routine set of practices, in a repetition of habitual social interactions.” (Nowicka, 2007).

As Edward Said put it in an interview with the Argentine-born Israeli pianist and conductor Daniel Barenboim, “the return to home is never simply a return, but there is an ‘interference’ that results in ‘no return but a profound unending finality’ – an unending search for a home.” (Said and Barenboim, 2004). One way of dealing with the sense of loss that can result from entering an unfamiliar environment is to try continuing life as it was back home, to make the new environment as close as possible to home, so that culture and customs can be continued. In Michael Brown’s words, “the search for a new place to call home: it means having to relocate oneself, to leave home and reconfigure it elsewhere.” (Gorman-Murray and Dowling, 2007).

What drives Suh to make these works is not quite homesickness, since there is never one home in his bicultural existence. It is nostalgia. Recreating past homes appears to be cathartic, allowing him to release some of his attachment to them. “I had a mild fear of not going back to those spaces that I care about”, he says. “You have to consume the whole space so that it can become part of you, but at the same time you can be totally free from it.”